NYPD tells TMZ … it received a flurry of calls from fans worried about Pete, so they’ve sent officers out to find him to do a welfare check.

Machine Gun Kelly tweeted about the situation, saying he’s on a plane to see Pete to make sure he’s good.

Jon Cryer also just tweeted that he heard Davidson is at ‘SNL’ and accounted for, and we’re being told the same.

The ‘SNL’ star posted the note on Instagram, saying … “i really don’t want to be on this earth anymore. i’m doing my best to stay here for you but i actually don’t know how much longer i can last.” 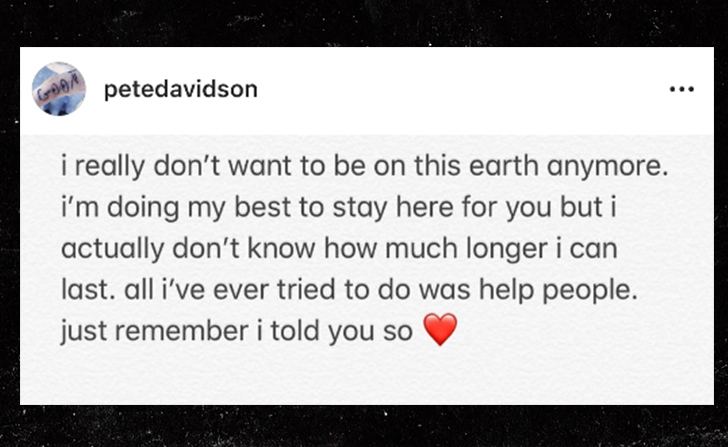 It’s unclear to whom Pete’s directing his words, but he adds … “all i’ve ever tried to do was help people. just remember i told you so.”

Davidson’s message seems to be a cry for help — just minutes before he posted it he responded to Kanye West going after his ex, Ariana Grande, by commending Ye for speaking about against mental health issues.

He said … “I can’t explain to you enough how difficult and scary it is to be honest about stuff like this.”

Just 2 weeks ago, Davidson went off on online trolls for harassing and bullying him, telling them he wouldn’t kill himself no matter how hard they tried to get him to.

As you know, it’s been a turbulent year for Pete. He got engaged to Grande and then they split, and he also had to deal with a controversy on ‘SNL’ for making a joke about a wounded vet.

Speaking of ‘SNL’ … there’s an all-new episode tonight with host Matt Damon and musical guests Miley Cyrus and Mark Ronson. We did some checking, and it doesn’t look like Pete was featured in any of the promos this week. It’s unclear if he’ll show up for work tonight.

Pete’s been very open about his mental health issues recently, but it’s clear now … he needs some more help.