She announced her separation from her husband earlier this month amid a shocking cheating scandal on his part.

And Cardi B was left unimpressed by her ex Offset – who admitted to missing his wife on Friday – as he crashed her Rolling Loud festival show in Los Angeles, California, on Saturday, in a bid for the pair to reconcile.

In a video obtained by Uproxx, the Bodak Yellow rapper, 26, failed to raise a smile as the 27-year-old Migos star brought out a ‘take me back’ banner while issuing a grovelling apology.

The former Love and Hip Hop star – who shares Kulture, five months, with her estranged husband – was stunned as her crew members brought out the elaborate sign, made out of white and red roses. 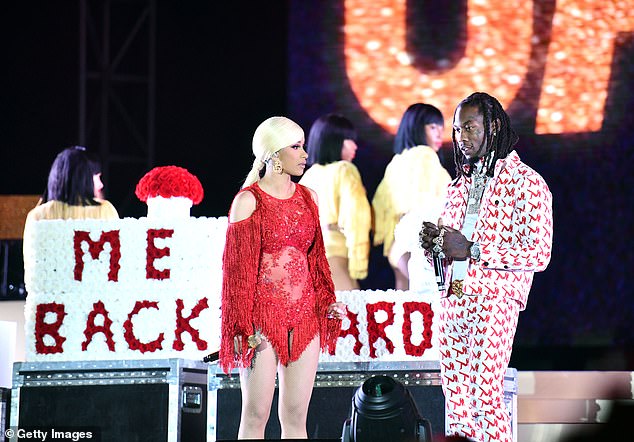 Moments later, Bad and Boujee hitmaker Offset made his dramatic entrance, which was met with a mixture of cheers and boos.

Cardi, real name Belcalis Marlenis Almanzar, appeared to huff and puff at the rapper’s grand gesture as she pulled back from him when he tried to reach out for her hand.

In his second apology in just two days, the Georgia native began: ‘I just wanna tell you I’m sorry. In person, in front of the world. Whatever I gotta do to show you I love you.’